8 Key Business Skills You Need to Build Your Pyramid

In 1989 I backpacked all over Europe for three months. I stayed in youth hostels, ate a lot of street vendor food, and got around by hitchhiking, Eurail, and foot. As my cash supply dwindled, I bought a one-way ticket to Cairo where I knew my money would last longer.

It did, and the business lessons I learned there lasted even longer. 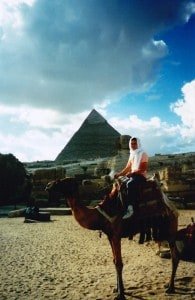 If you don’t have the Great Pyramid of Giza on your Life List, consider adding it.

It’s the oldest of the Seven Wonders of the Ancient World, and the only one to remain mostly intact.

There are a lot of theories on how it was constructed, but this we know:

The Great Pyramid is truly an architectural wonder that was built to stand the test of time.

So what does this have to do with you and me and our businesses?

These eight key skills correspond to the four sides of the pyramid’s base and the four sides going up to the pinnacle. Result? A very solid business.

The ancient Egyptians didn’t use these eight skills (it’s a metaphor, and perhaps a stretch to make my point.)

But I did witness each of these business skills in practice by modern-day Egyptians as I hung out like a local (as much as a pale-skinned American college student could do.) Those stories are way too long for a blog post, so you’ll have to read the upcoming book or come to an Ultimate Writing Retreat™ for details.

The four “hard” skills (the four sides making up the base of the pyramid):

1. Copywriting. This is the Copywriter Café, so of course I’m going to start here. You simply have to learn how to persuade with words, or hire someone to do it.

2. Marketing. You need to understand marketing systems. Random campaigns or sporadic attempts won’t cut it. One of the best and easiest ways? Build a list through valuable content, then stay connected with your audience on a regular basis. More about this in future posts.

3. Selling. I believe selling is just as important today as ever. Even with the best marketing and copywriting, you will have to communicate with clients and prospects by phone or in person at some point.

4. Connecting. In 2013, this is a combination of social media skills, good old fashioned networking, meeting with people over coffee, making business connections, and simply making friends. Yes, it’s a skill.

And here are the four “soft” skills (the four sides going up to the pinnacle):

5. An abundance mindset. Do you really want to become wealthy? Do you have a positive view of rich people and how they got there?

6. An entrepreneurial spirit. Do you have the drive to do things on your own? A sense of rugged individualism?

7. Style. Okay, this one is hard to describe, but I think you need a confident, successful image. You don’t have to be good-looking, but you should have poise and a sharp appearance.

8. Resilience. Are you open to trying new ideas, even if they might fail? Are you open to constructive feedback, yet immune to harsh criticism? Do you have bounce-back-ability? You’ll need it. Things don’t always work out on the first try.

There you go, eight skills that form the base and sides of a rock-solid business pyramid. I’ll expand on each of these in future posts.

My suggestion? Work on each of them consistently, simultaneously. Little by little, you’ll build up your business the way the ancient Egyptians built the Great Pyramid.

And somewhere along the way, take a break and book a trip to Egypt. You won’t be disappointed.