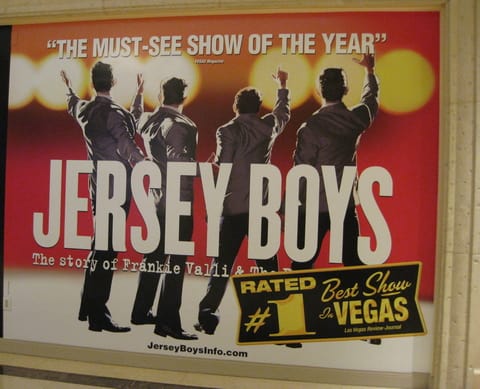 “Frankie, this is your time.” 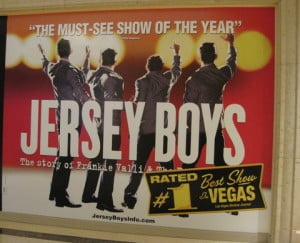 Is this your time?

Have you been teetering on the edge, trying to build a true business from your writing or copywriting skills, close to breaking through, but not quite there?

Go see Jersey Boys on the big screen or the stage. You won’t be disappointed.

Last week I took my son, Solomon, to go see Jersey Boys at a movie theater in Quito, Ecuador. Solomon is a budding musician who’s had some small local success, but yearns to make it big and isn’t willing to wait a couple years.

Truth be told, I hoped to find some golden nuggets of success wisdom myself. We both came away changed.

A sound nobody had ever heard

Jersey Boys is the hit musical, and now a major motion picture directed by Clint Eastwood, about Frankie Valli and the Four Seasons. It goes behind the music and tells the backstory of one of the most successful bands in pop music history. (Did you know they had 16 Top 40 hits in a period of 28 months between 1962 and 1964, and enjoyed their strongest year of sales in 1964 when Beatlemania struck?)

While the Four Seasons’ sound of perfect harmonies is legendary (“Sherry,” “Big Girls Don’t Cry,” “Walk Like a Man”), little was known about the struggles they overcame as they rose to fame.

Scribbling furiously in the dark in my little black notebook, it seemed like each story had a parallel lesson for aspiring independent creatives like us:

1. Find someone who believes in you and can mentor you. Christopher Walken’s character Gyp DeCarlo is that person for Frankie, taking him under his wing, encouraging him before he’s big, and giving him sound business advice.

2. Choose your friends and business associates wisely. Early on we see Frankie get mixed up with the law, and it’s a curse that stays with him throughout the film.

Most of us don’t have friends who will end up in the joint, but we still need to be careful about who we associate it and what type of clients we seek. Discernment is specially important when choosing business partners, if at all.

3. Do your exercises. At different times DeCarlo, Tommy DeVito, and Nick Massi all tell Frankie to “do your exercises,” meaning his vocal exercises. He had a naturally beautiful voice, but he still needed to practice.

So do we. Whatever level you’ve achieved so far with your writing, don’t rest on your laurels. And don’t just practice for the sake of practicing (for example, copying examples of good copy to ingrain the rhythm, cadence, and flow into your own copywriting). Practice by stretching yourself and taking on challenging projects that force you to continue to develop your voice and style.

4. Work at it. The Beatles paid their dues in the clubs in Hamburg from August 1960 to December 1962. The Four Seasons honed their skills in small clubs and lounges all over the country in the late 50s and early 60s before finally scoring a hit (a #1 hit) with “Sherry” in 1962.

Chances are you’ll have to pay your dues before you strike it big in the copywriting world. Accept the fact that the overnight success stories you hear about are rare.

Nothing wrong with taking some time to figure out who you really are as long as you eventually settle on a name, a “sound,” a style, and something I talk about a lot – a brand.

6. Take your show on the road. Wouldn’t it be great if all our clients came to us via “magnetic marketing” systems? No matter how great a copywriter you are or how great your in-bound marketing systems are, chances are you’ll have to be like the Four Seasons and actively pursue clients.

They took their show on the road early in their career (see #4 above), and Frankie Valli also took his show on the road to Las Vegas later in his career (to pay off a band member’s debt). Do what it takes to make your business successful.

7. Recognize your talents. All four of the Four Seasons recognized that Frankie had the golden voice, and they knew Bob Gaudio was the songwriting magician. Develop your strengths and gifts, and don’t worry about the stuff you’re not good at.

8. Go where the money is. Early on Valli and Gaudio realized that the money wasn’t in writing or performing the songs. The money was in controlling the rights to the songs. The two of them formed The Four Season Partnership, with each of them owning fifty percent of the act and its assets, including virtually all of its recording catalog. HUGE.

Likewise, for independent creatives like us, the big money isn’t in being a copywriting hired gun. It’s in forming a business using your copywriting skills and building true equity. I’ll be talking a lot more about this in the coming months, and showing you how to do it.

9. Go big but don’t shun the small stuff. Even after the Four Seasons performed on American Bandstand and The Ed Sullivan Show, they were still willing to play the small clubs to continue reaching more fans and making money. Frankie Valli continued to drive an old car and live in a housing project until the mid-1960s, when success finally seemed real.

You may land a big client or two, with a fat fee including royalties, but be open to doing “bread and butter” projects that are smaller, perhaps steadier, and combined can add up to substantial amounts.

10. Reinvent yourself when you need to. Throughout the Four Seasons’ career, they’ve had 24 different names, six record labels, and many stylistic changes as the culture and taste of fans changed.

You may need to do the same, too. What worked for you in 2010 may not work anymore in 2015. The competition may catch up, hot niches come and go, and the demand for your services could turn on a dime. As an Independent Creative, be prepared to reinvent yourself, often.

Who knows? At some point reinvention could lead to your own version of Grease, the #1 hit Valli scored in 1978 while the motion picture of the same name became the highest-grossing musical in cinematic history

11. Keep going even when it’s not fun. As much as they loved performing, the Four Seasons – especially Gaudio and Valli – always looked at it as a business. Writing, copywriting, marketing, and selling won’t always be fun (although when you’re making good money they usually are), so look at what you’re doing as building a business, not an outlet for the creative expression of your talents.

12. Have a long-term vision. Along those same lines, decide that you’re in it for the long haul. At one point in the movie, Valli says, “That’s why I’m still out there singin’, like that bunny on TV with the battery, I just keep goin’ and goin’ and goin’… chasin’ the music, tryin’ to get home.” Singing is what he’s about, and the Four Seasons are the only group to have a Top 100 Billboard hit in each decade of the 50s, 60s, 70s, 80s, and 90s.

Do you see your business lasting not only a few years, but decades like the Four Seasons’ business?

13. When everything seems lost, press on. “You gotta climb out of this, Frankie,” implores his mentor and friend, DeCarlo, when Valli discovers that the band is $665,000 in debt. And climb out of it he did. Transforming himself into a solo act with a back-up band reminiscent of the Big Band era, he scores a #2 hit with Can’t Take My Eyes Off of You” in May of 1967.

If you have the talent as a copywriter and marketer, you can always climb out of a bleak situation with one good idea.

14. If you have one or two good friends through it all, you’re doing well. In spite of losing his marriage, his daughter, and a lot of money that was out of his control, Valli’s friends Bob Gaudio and Gyp DeCarlo were always there for him.

Count your blessings if you have a true friend or two. Even better if they’re in the business and can understand what you’re going through.

15. When you find the “next thing,” run with it. After struggling in the early 70s as the music scene tilted toward rock with a harder edge, Valli came back with another #1 song that some people described as “an art song,” and many thought would flop: My Eyes Adored You. When everyone else is “zigging,” maybe it’s time for you to “zag.”

If you feel passionate about a new direction, and it fits your style, voice, and brand, go for it.

And speaking of your “sound,” I’ll let Frankie Valli have the last word here:

“They ask ya ‘what was the high point?’ The Hall of Fame, sellin’ all those records, pullin’ Sherry outta the hat? It was all great. But the first time the four of us made that sound, our sound … when everything dropped away and all there was was the music … that was the best.”

Have you seen the movie or musical? Any lessons I missed? Let me know here.