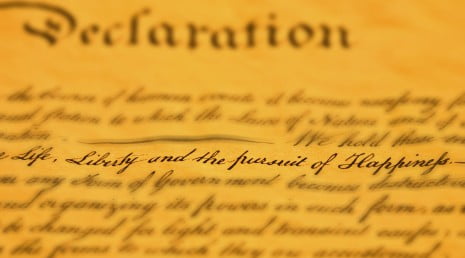 Life, liberty, and the pursuit of happyness

No, I didn’t misspell the title of this blog post. I know happiness is spelled with an “i,” but I’m referring to the 2006 movie with Will Smith and his son Jaden.

The Pursuit of Happyness is based on the true story of Chris Gardner (played by Smith), a down-on-his-luck salesman who gets whacked by some serious life events and ends up homeless for a year in San Francisco.

The thing I like about the movie is that the main character has to deal with more pitfalls and obstacles than the typical Hollywood feel-good movie.

I have vivid memories of watching The Pursuit of Happyness at the end of 2006, two years after I first discovered copywriting, and two years before I would finally act on it.

A good, salaried job kept me from going after copywriting with gusto like I should have. I kept letting little obstacles get in the way, like lack of time, lack of direction, and lack of knowledge.

It touched me because I realized that Chris Gardner had ten times the problems I’ve ever experienced.

I was making excuses, and here was a guy who was a single parent, homeless, with no connections or experience in his newly chosen field (again, the movie is based on a true story.) Yet he succeeded in not only getting a brokerage position with Dean Witter, but eventually becoming a Wall Street legend.

What are you pursuing?

There’s a great scene in the movie at the homeless shelter where Chris is staying. The Reverend of the church there says:

I can relate, and maybe you can, too. The top of the mountain is a glorious place to be, but it’s in the valleys and trenches where careers are made.

I believe we have an amazing opportunity in this land of purple mountain majesty. If you have copywriting and entrepreneurial skills, the world is at your command.

The key is to put them into action, and like Chris Gardner, push through the rough times. It won’t necessarily be a smooth, pleasant path. But good ol’ Thomas Jefferson had something when he penned that bit about “life, liberty and the pursuit of happiness.”

Happiness itself doesn’t have to be the goal. It’s subjective anyway, you know?

It’s when we’re pursuing happiness that we feel most fulfilled. And that’s available to all of us.

If you’ve had an experience of overcoming odds, or pushing through obstacles and succeeding, I’d love to hear about it.

As you pursue your version of happyness and the writer’s life, let me know if I can help with advice, copy critiques, training, or anything else.