The magic of thinking big 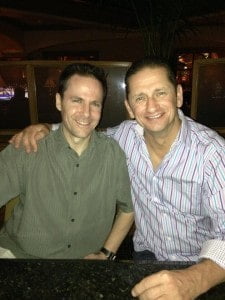 A few weeks ago I had dinner with an old friend at Charlie Palmer Steak at the Four Seasons in Las Vegas.

I hadn’t seen Frank in 25 years, and we caught up on a lot of stuff that’s happened in both our lives, good and bad.

You have to understand. When I first met Frank in 1986, I was a wide-eyed freshman at the University of Wisconsin – Madison. I didn’t have a clue about school, business, or life.

That summer, I had the opportunity to  work for The Southwestern Company out of Nashville, Tennessee. We sold educational books door-to-door, 80 hours a week, on straight commission, 780 miles from home in upstate New York.

Frank was the fearless leader of our group of about 25 students. He was a senior, and a rock star in my book. I think he made about $30,000 that summer, and a lot more the next two summers.

He taught me how to sell ideas, how to communicate one-on-one with people from all walks of life, and how to run my own small business.

More than anything, he taught me how to think big. That alone has served me well ever since.

Not hard to do, right? They’re everywhere.

Problem is, in our society, success is almost looked at with derision. Get past society’s disdain for successful people, and seek them out.

Instead of envying them like a majority of people, study them. Figure out what they’ve done to get where they are, and follow their lead.

Among many other things, one thing they all do – they’re always thinking big.

3. Aim to not only be like successful people, but eventually beat them

I admired Frank, studied everything he did, and learned from him, but I did  one thing wrong. I held him in such high regard that I never thought I could beat him (and I didn’t.)

These days, I admire those copywriters I just mentioned. I read everything I can get my hands on by them. And I try to put it all into action.

That could mean many different things.

It could mean earning more lifetime income (because I’m planning to live a lot longer and write my entire life.)

It could mean writing more best-selling books, or putting on more big events, or impacting more copywriters through training and coaching.

The fact is, I believe I can do it.

I got that from Frank Monzo live and in person over the course of three summers. I also just dug it out from a dog-eared copy of his Advanced Sales notes dated January 20, 1987, where that word is listed in points number 2, 9, 10, and 13.

Thanks, Frank. I owe you one.