Why I don’t write in my pajamas 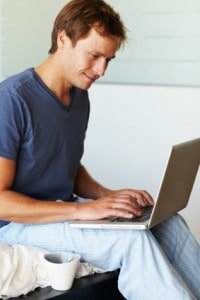 Ah … the writer’s life. Wake up whenever you want, have a leisurely cup or two of coffee, then meander to your keyboard and shift into creative mode.

That’s the beauty of being a freelancer, right? No boss, no commute, no wardrobe requirements. What’s not to like? You can hang out all day in your pajamas if you want, and I know plenty of writers who do.

If it works for you, carry on.

All I know is that if I worked in my pajamas, I’d be a seriously struggling writer.

For me, the discipline of getting up, taking a shower, putting on nice clothes, and then walking down the hall to my office to write is powerful. It’s had a profound effect on my writing business.

Maybe it’s a leftover habit from my days of getting up every day at exactly 5:59 A.M., saying positive affirmations in front of the mirror and in the shower, dressing to the nines to call on high-flying attorneys, and heading out the door by 7:00 sharp.

Now that I operate on my own terms as a copywriter, no one is going to know whether I’m dressed well or not. But I know that when I look good, I feel good. That transfers to my writing, and it definitely transfers to my phone conversations with clients and colleagues. I feel more professional, and that extra boost of self-confidence radiates into everything I do.

I simply cannot imagine working the deals I do and landing the gigs I get if I was lounging around in my pajamas, looking like I just rolled out of bed.

Paradoxically, the more you treat your freelance writer lifestyle like a real business and a corporate job, especially in the beginning, the more real freedom you’ll enjoy later on.

Freedom to travel and work when and where you choose. Freedom to work limited hours and structure your work around your life. Freedom to pursue personal projects in addition to working for clients.

Get disciplined on the little things, to free yourself up for the big things.

Give it a try. Go professional over pajamas.

What’s your style? Pajamas and sweats, jeans and t-shirts, or suitable for a business meeting? I’m interested to know what works for you in the comments below.